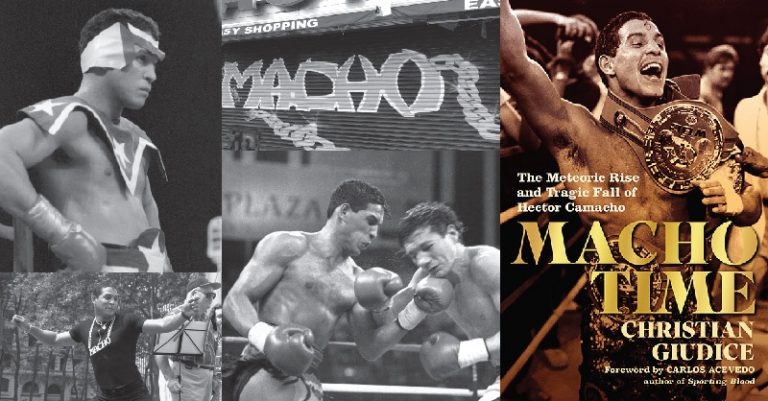 Below is the Foreword from Christian Giudice’s new book, Macho Time: The Meteoric Rise and Tragic Fall of Hector Camacho, written by Carlos Acevedo, author of Sporting Blood: Tales From The Dark Side Of Boxing.

He was garish, crude, outlandish, lewd, reckless, and loud. Everybody paid attention to him—he made sure of that. Hector “Macho” Camacho was the first fighter since Cassius Clay/Muhammad Ali appeared in the early 1960s to master the art of negative appeal.

This wide-eyed wild child, whose love of joyrides earned him a bid on Rikers Island when he was still a teenager, lived out his vivid dreams of being a perpetual commotion. Wherever Camacho went—Detroit, Los Angeles, Florida, Puerto Rico, Alaska, New York, Atlantic City, Las Vegas—he brought his own peculiar fantasia with him, in the neon palette of his peak era: magenta, gold, fuchsia, mauve, lavender, metallic silver. “I always wanted to dress in leather suits,” he once said. And because Camacho barely recognized limits, he went far, far beyond the leather suit.

In Macho Time, the first comprehensive biography of Hector Camacho, Christian Giudice uses the same methodology that made his biographies of Roberto Duran, Wilfredo Gomez, and Alexis Arguello models of reportorial legwork: complete immersion in his subject. Thoroughly researched (Giudice interviewed Camacho’s son, Junior, most of his family, friends, ex-friends, writers, managers, trainers, promoters, and opponents), Macho Time is a revealing portrait of a gifted athlete who blurred image and reality to such an extent that he ultimately seemed unable to tell the difference between them. In the end, like some sort of postmodern conceit, Camacho succumbed to the image he had created.

In tracking down one Camacho associate after another from his early days, Giudice also captures the era and the place—Spanish Harlem—that not only formed a unique fighter, but a unique celebrity as well. Crime, drugs, arson—El Barrio was then a neighborhood that epitomized urban squalor. This was also the Golden Age of street gangs, and Camacho was part of one. “Around this time,” writes Giudice, “prevalent Spanish Harlem gangs included the likes of the Spanish Kings, the Wild Aces, the Renegades of Harlem, and the Baby Satans, and people had to respect their ‘blocks.’ Hector was associated with the Jefferson Crusaders. Although it fashioned itself as a neighborhood-watch group in the Jefferson Projects, it used violent tactics when outsiders interfered.”

While his outrageous flair would eventually overshadow his accomplishments, the fact remains that, in the 1980s, Camacho was one of the most talented fighters in the world. During the early Reagan years, nothing succeeded like excess, and Camacho personified the hedonistic philosophy of the decade with boorish aplomb. But if Camacho burned his candle at both ends, he lit the wick with a blowtorch. As a fighter, he was through by the time he was twenty-five years old, his startling combination of athleticism and precision already looking as obsolete as ColecoVision.

Still, between the first retirement of Sugar Ray Leonard and the arrival of Roy Jones Jr., Camacho was the fastest fighter in the world. His pinpoint combinations resembled futurist blurs, and his ability to throw multiple hooks and uppercuts in microseconds left average fighters overwhelmed. Timing, speed, coordination, defense, reflexes, balance, a surprising mean streak: Camacho had it all before fame sabotaged his talent.

Late nights, promotional squabbles, inactivity, and a drug habit robbed him of his physical gifts long before his cruel vocation could. Is it possible that a fighter who would someday win titles in multiple divisions and enter the International Boxing Hall of Fame could be a disappointment? In the case of Camacho, the answer is yes—in bold letters. As promising as Camacho was during his rise, as accomplished as he was after only a few years as a pro, nothing less than crossover stardom would have been enough for him. But the superfights that marked the 1980s—starring Sugar Ray Leonard, Marvelous Marvin Hagler, Roberto Duran, Thomas Hearns, Aaron Pryor, Alexis Arguello, and Larry Holmes—did not include “The Macho Man.”

To accompany his painstakingly detailed accounts of fights and controversy, Giudice even investigates the fashion sense of a man who designed his own over-the-top outfits to stand out from the herd. The stripes and piping of the average pug (not to mention the ubiquitous terrycloth robe) were replaced by tassels, epaulets, masks, fringe, diapers, capes, ponchos, codpieces, loincloths, sequins, glitter, Cazals, and a variety of bizarre headdresses (including a pharaonic domepiece and a strange Norfin troll sprout that topped a bizarre Venetian ensemble). At various times Camacho entered the ring decked out as if to attend a Halloween party. Down the aisle he would bop: now a matador, or a fireman, or a centurion; now some sort of Darth Vader character, or even a Chinese peasant (wearing a conical hat). Once, it was a Native American outfit, complete with war bonnet, almost certainly inspired by the Village People or a TV viewing of Chief Jay Strongbow. “Occasionally, Hector would become secretive about his next ring costume,” writes Giudice. “He would sketch it on a pad and then cover it up so Junior could not see. ‘No one could touch or see his outfits,’ said Junior. ‘I remember the only time he got mad at me, he was like, ‘Did you fucking touch my outfit?’ His style was unique, and it didn’t come from anywhere. That was just him.”

While Giudice traces the life of Camacho from his turbulent days as a child raised in a dysfunctional family to his rise as a three-time Golden Gloves champion to his early pro career, when his future seemed limitless, to his last lost years in the ring and out, he also captures poignant snapshots of Camacho through the eyes of his son, Hector Jr., a former fighter himself, whose childhood was dominated by the bedlam that trailed his volatile celebrity dad. For Junior, there were other issues as well. “I never wanted to fight,” he tells Giudice, “but I didn’t want to be a pussy. It was hard to hold that Macho image, but I wanted to show my father that I ain’t no sucker. I wanted to be Macho too.”

When he died in 2012, shot to death while sitting in a parked car full of cocaine with a friend (who happened to be a pimp and drug dealer), Camacho had come full circle from his days as a Rikers Island inmate. Between those endpoints, however, Camacho came close to achieving what he had desired ever since he was a child growing up in the Johnson Houses: “When I was young, I always said, ‘I want to be a hero. I want to be one of a kind.’”

Macho Time reveals the often-moving circumstances behind the man who made at least half of his dreams come true.