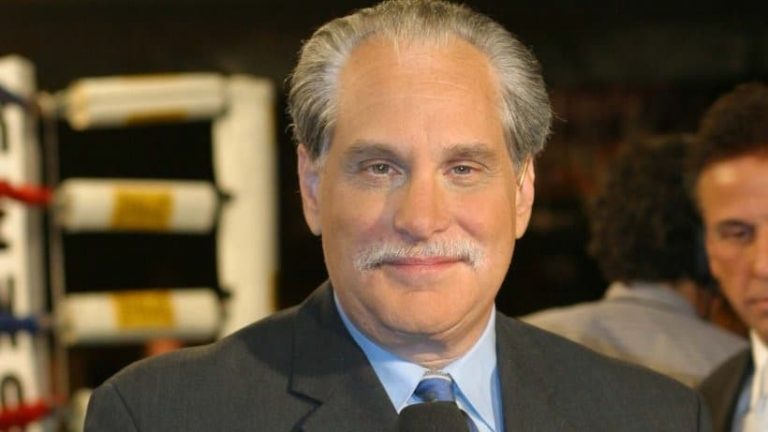 Author and journalist Paul Zanon interviews Showtime boxing analyst and International Boxing Hall of Fame member Al Bernstein about his life in show business, love of music, and his joy in putting on a show for audiences in Vegas and wherever he has the time to sing for an audience while on the road.  Connect with Paul Zanon and Al Bernstein on Twitter

“My dad had a number of passions and one of them was comedy writing. He wrote some jokes for Henny Youngman, an old-time comedian, who was pretty famous, but he never quite got that off the ground. With the opportunities these days, he might have forged a career in the entertainment industry.”

Despite being an award-winning writer, Al Bernstein never tried scriptwriting. He did, however, become involved in show business on several levels. In 1975, as Chicago’s favorite face of boxing was starting out in journalism, the movie screens were being graced by the first installment of the Rocky series. Bernstein recalled. “I was a big fan of the movie. Oh yeah. Oh gosh, yes. I don’t think I’d even started writing for Boxing Illustrated or Ring magazine yet. I think I started writing for them around 1977 and this film came out a year or two before. Like most people, I was very taken with the movie and thought it was extraordinary. I just never thought I’d end up in one of the movies down the line.”

Fifteen years after Rocky Balboa first locked horns with Apollo Creed, Bernstein made his screen debut, playing himself in Rocky V. “Here’s the funny thing—I was supposed to be in Rocky III. In those days there was boxing on ESPN and USA Network on a regular basis. Apparently, Stallone and his people liked me and asked if I could be in the movie. Unfortunately, ESPN would not allow me to be in Rocky III because in the movie they were using microphone flags that said USA Network and they did not want me associated with that branding. If you look back at the film, Stallone’s protest of that decision was to name my replacement as something like Al Berdini. He gave the guy my name in Italian as a homage to me because I couldn’t be in the movie. Flash forward to Rocky V in 1990 and although I was still with ESPN, for some reason they didn’t have any issues.”

Bernstein gave an insight into working alongside Sylvester Stallone and the late Tommy Morrison. “Tommy Morrison did a really good job. That was his first movie and he was one of the leads. Was he Lawrence Olivier? No. But I thought he was perfectly acceptable for someone doing their first movie—by far. Here’s the other thing. Every time he was on set, he nailed it every take. He was never the person who made something not work. He was ready, he came and he did his job. I was really shocked that he never pursued acting, because based on that performance, it was pretty extraordinary.

“I like Sly (Stallone). He was fun to be around on set. What not many people remember, though, is that he had promoted boxing on ESPN. He had a promotional company called Tiger Eye. He promoted the Eddie Mustafa Muhammad versus Jerry Celestine fight (January 22, 1983) and one prior to that, which I don’t remember. That’s when I first met him properly. He was a big boxing fan and we talked boxing and he was delightful.”

Bernstein went on to feature in a host of films, either playing himself or a boxing commentator in some guise. Among others, he starred in Play It to the Bone with Woody Harrelson and Antonio Banderas in 1999 and Vinny Pazienza’s biopic, Bleed For This in 2016. Having worked alongside some of the best talent in the business, Bernstein recalled his favorite movie moment. “It was a Showtime movie in 2004 called Paradise. David Strathairn was in it, who I admire incredibly as an actor and Elaine Stritch was also in it. The film had a boxing scene and they had me playing myself, doing the announcing.

“A lot of times in the movies, you do your bit and you don’t get the chance to see the stars because you have your part filmed on your own. However, in this one, we were all around together and in between the scenes I’d get to speak to the cast. I’m a massive musical theater buff and Elaine Stritch is a legend, right? I went up and introduced myself and thought, ‘What have I got to lose?’ I said, ‘Hi. I’m Al Bernstein. You probably don’t know me. I’m a sports guy and I’m doing the boxing thing in the movie.’ She said, ‘Yes. I saw you over there. Everybody here says you’re very famous.’ I said, ‘I’m not sure about that, but I’m a huge fan of yours.’

“We talked on and off in between the breaks for at least two hours, discussing her roles in musical theater. I was asking her so many questions that on several occasions I said, ‘Please stop me if I’m bothering you,’ but she was lovely and kept answering everything with great detail. That was the most fun movie set to be on, purely because I got to have quality time with Elaine Stritch.”

Long before Bernstein threw his hat into the movie ring, he had been making noise in a different way. In 1988, Bernstein recorded his first album, ‘My Very Own Songs,’ which was influenced by his time around sports and television. He also released another album in 1996 called, ‘Let the Games Begin.’ Bernstein explained his route into singing. “Back in Chicago, when I was a newspaper editor and before I became a sportscaster, I used to love to sing. Then in the ’80s I started coming to Vegas and I would sit in places where we knew a lot of people in the entertainment industry, including singers. Sometimes I’d join in for a song with them and people around Vegas got to know that I liked singing. Then, when fight fans knew I was in town and they knew I was going to a certain lounge, they’d drop by.

“Then Barry McGuigan fought Steve Cruz [June 23, 1986] in Las Vegas and Barry McGuigan’s dad, Pat, a good tenor, did a weekend at the lounge singing in Caesars Palace. People loved it, especially the boxing crowd. Fast-forward a few months and I was having dinner with the executives of Caesars Palace about four or five months before the Hagler versus Leonard fight [April 6, 1987]. I don’t remember who the president was at the time, but he said, ‘Don’t you sing?’ and I said, ‘Yeah. I love to sing.’ He replies, ‘One of my guys said you are good,’ and I was humbled and said, ‘Thank you.’ He then said, ‘Wait a second. You are going to do what Barry McGuigan’s dad’s did at the lounge, for the three nights leading up to Hagler–Leonard.’ I said, ‘OK!’, but I didn’t have a band, an act. I didn’t have anything and I had four months to figure it out.

“I got together with a guy in Vegas who helped put together a show for me. I was living in Chicago and came to Vegas and went through all the rehearsals, practiced it over and over and then came out a week before the Hagler, Leonard fight. We went out to this studio out in the desert and spent four days woodshedding with the band and got the act together.

“I did the act for the three nights leading up to the fight at the lounge in Caesars and it was great fun. We had everybody there. When you looked out into the audience there was Victor French, Michael Landon. Then on another table there was Tommy Hearns, Bill Clancy, Bob Arum. The place was full of big names and, at one point, I thought to myself, ‘What the hell have you got yourself into?’ However, it went well and I ended up doing several more of these shows that I would do in advance of the big fights, which was fun.”

The long list of fights Bernstein performed in advance of is impressive to say the least. Buster Douglas versus Mike Tyson, and Douglas versus Evander Holyfield are just another couple of quick examples. However, with regular shows comes the need for a varied repertoire. Bernstein explained his inspiration behind his eclectic taste. “Even though I sing the Great American Songbook, jazz songs, blues and a little country, mainly because those are the songs I’m capable of doing, my taste in music is very broad. I love rock, country rock, rhythm and blues and most forms of music to be honest. Of the genre of music I do most often, I’m a huge fan of Sammy Davis Jr., Mel Tormé and a number of those kind of singers. Guys I grew up listening to and admired. I also love Bob Seger and Van Morrison and try to incorporate some of their songs into what I do.

“Here’s a couple of funny stories for you. Don Dunphy first. He loved musical theater in New York. He was there for the opening night of My Fair Lady when it opened. He was a big celebrity in the ’50s, ’60’s and ’70s in New York and everywhere in fact. He knew Irving Berlin, Cole Porter, Lerner and Lowe—he knew all the major names of Broadway theater. Don came to one of my shows in Vegas and he said, ‘You have to sing a song by Lerner and Lowe. I said, ‘OK.’

“My other story involves Anthony Newley. I did one of my shows at Caesars and Anthony Newley, who used to come to the fights, was in the crowd. I couldn’t believe it. Michael Buffer, would do an in-between act for me, where he would do his impressions and he’d introduced all the celebrities and on this occasion Anthony was there.

“After the show, I was there with the band and I turned around and there he was. I said, ‘Oh my! Anthony Newley! I hope the show was OK for you.’ He said, ‘I’ve got an idea for you.’ I thought he was going to ask me to sing one of his songs he’d written, because I’d done one and, hopefully, he didn’t think I’d butchered it. He then said, ‘There’s a song you have to sing. ‘A Nightingale Sang in Berkley Square.’ I said, ‘That’s a beautiful song.’ And he said, ‘I’m telling you, it will be the song people will want you to sing the rest of your life.’

“The next show I sang the song and it’s now the one song that everyone asks me to sing again for them. Anthony Newley had seen me one time in one show, didn’t know me from Adam, and picked up this relatively obscure song and knew immediately it was the perfect song for me get up and sing. Now that’s genius.”